The Executive Presence Sweetspot – not just for executives

Over the last two blog posts we have explored the subject of Leadership impact, how Leadership = Impact = Culture as leadership is very contagious.

If you haven’t read them, check them out before you continue reading. Thanks!

This week we want to turn our attention to Executive Presence and how it plays a part of the impact you have.

Executive presence is a combination of behaviours, skills and style, and can sometimes be described as the ability to command a room (sometimes completely without saying or doing anything). Effective executive presence can look different in different leaders. Some exude it, regardless of what position they have. So what is it? How would you describe it? And how do you get it and develop it, if it’s not already there?

We were recently in a situation with 50 leaders in a room where a senior leader was joining us, whom we had not previously met. As soon as she entered the room, we could tell it was her by the way she strode in, confidently, her eyes were scanning the room, smiling, nodding and acknowledging people’s presence, indicating that she had seen them and would get to them. She moved easily to her seat and started a conversation with the people at that table; interested, engaged. The way people reacted when she arrived, confirmed who she was to us. They turned their attention towards her, almost straightening their posture in their chairs, and clearly signaling that they knew she was there. Some were even getting up and walking up to her, extending a hand, hence demanding her attention. Others sat back but their radar was still on with regards to where she was. She became the focus of attention, whether she wanted it or not.

Even if she had not had executive presence, she would have attracted their attention because of her position. There’s always positional presence, dictated by the seniority of the role, but executive presence is about more than a title and hierarchy.

We are talking here about effective executive presence, needed to build relationships and long-term success. Many of us may have experienced not so positive executive presence, where leaders have used their position of power to dominate, instill fear and influence in a manipulative and negative way. In the story above, the senior leader could have had a very different response from people if she had stormed into the room, on her phone, still talking, acting all superior and only wanting to talk to the more senior people for example. It would have made people feel unimportant, not respected and not appreciated. Back in the workplace this would lead to you not wanting to go the extra mile for that leader, so productivity would be negatively affected. There would arguably have been some kind of executive presence but not of the kind that drives trust and sustainable collaborative followership. There’s nothing endearing about dictatorial leadership.

We have been working with and studying leaders and their impact for 22 years and have identified five areas of Executive Presence, made up by a number of behaviours that represent that presence. 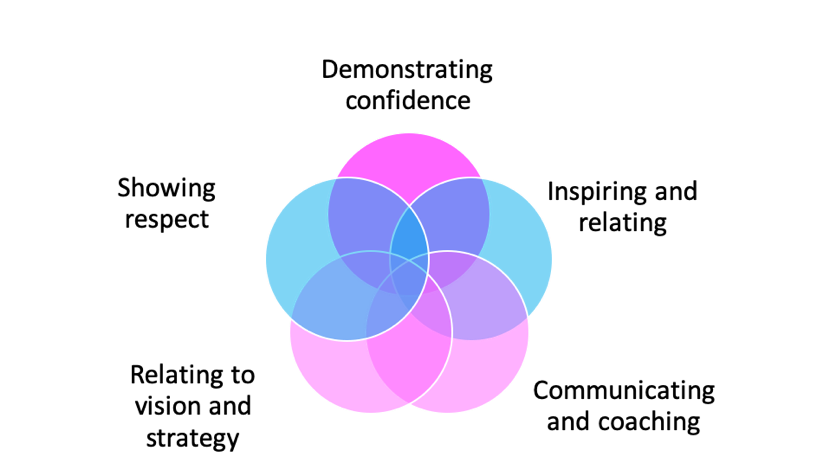 Reflect on the five behavioural areas above and how often and consistently you think you display these today and which ones you need to be more intentional about living to deepen your impact and grow as a leader. Which area(s) do you think are most important for you to develop?

The most effective leaders are able to tap into each of these behavioural areas when needed, hence creating an Executive Sweetspot in the middle, where they can have the greatest positive impact.

Executive Presence is a great career builder, if used authentically. That’s when it’s experienced as something great by others, something that creates greater collaboration, more trust, more innovative solutions and better results.

Want to know more about the behaviours that make up the behavioural clusters above? And how to develop those behaviours? Check out chapter six of our new book “The Leader’s Guide to Impact”.

We wish you great impact!